My first day back at work – what about yours?

So I’m sitting here at my desk with my usual two laptops fired up.

I took a quick pic with my phone so you can see me ‘at work’, which is why my hand is reaching towards you – it’s holding the camera. 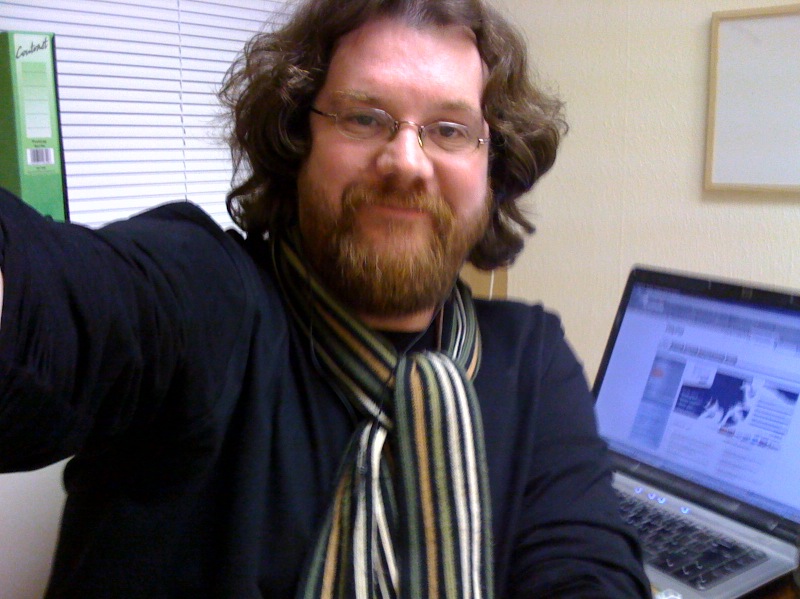 And of course I’m logged into my blog to write this.

The other laptop has only one screen open and that’s Youtube.

And it has absolutely nothing to do with internet marketing.

I have headphones in and I’ve been bouncing round in my big comfy leather chair listening to Jimmy Hendrix, Van Morrison, The Fratellis, Radiohead, and other decidely dodgy music while I work.

And I’m having a great time.

This is my first ‘real’ day back at work although I’ve been checking on the emails and stuff throughout the whole of the Christmas period.

And I’m loving it.

It’s really good to be back at work.

And if it doesn’t feel like that for you then maybe you should have a long hard think about what you’re doing.

Because here’s a sad fact about our society.

It’s become the norm to hate work.Most people don’t like their job. In fact we;re brought up to expect to dislike our jobs from an early age, albeit in a very gentle, almost subkiminal way – look at TV adverts and lifestyle TV – much of the focus is on escape, dream lifestyles and getting away from the ‘rat race’.

Which is partly the reason that we don’t have a mass revolt on the first Monday in January each year.

And it’s possibly the reason why salaries appear to be designed to keep you JUST above the breadline.

Think about it – most people in Western societies (although things may change this year) are able to pay their mortgage or rent, buy decent food, clothe them,selves and their families and have enough left over for holidays, electronic gadgets, trips out, and some nice things for their home.

But not much else.

It’s becoming rarer to hear about people investing for the future.

It’s becoming rarer for people to take off 4 months to travel around Europe or learn how to play the Oboe – or to just take a ‘sabbatical’ from work for a while.

In fact it’s becoming rarer to hear about anyone who doesn’t seem to be just about managing to keep the wolf from the door financially.

How many times do you hear of people who scale down their hours at work – go part time – because they can afford to do so and just ‘want the time’?

Are salaries deliberately kept at a level where most people are just about able to survive month to month, unable to stash away any real savings?

I have no idea.

But imagine if a significant percentage of the population had three year’s worth of salary saved up.

Would you have gone into work today with 80 grand in the bank?

Or would you have thought ‘Bugger this, I’m taking a year off to spend canoeing with my family in South America’? or whatever your dream equivalent is?

But life is – or rather SHOULD be – about choices.

Imagine if a million people decided to take a year off at once?

I agree – but it COULD happen to YOU.

The beauty of our social system is that people ‘play the game’ – they follow the rules.

Most people have never thought about taking a year off in their lives, and they never will. Because they think it’s unusual, wacky or just something that other people do.

And that leaves a lot of potential for people like me and you who are aware that there is an alternative way – a much more liberated way – to live.

So if you’ve had serious thoughts about starting or developing your online business but then thought ‘if this is acheivable why isn’t everyone doing it’?

And there’s safety in that.

It costs in terms of freedom, finances and time.

Setting up your online business is scary.

You might fail – family and friends might (probably will to start with) laugh at you, ridicule you or possibly even get angry.

You might succeed – even scarier eh? Because then you have to start thinking about what you want to do with your new found money and free time.

In fact how many people go back to full-time jobs after trying to set up their own business ‘because of the security’?

This is a huge undertaking you’re about to begin.

Make no mistake this is a life changing decision.

If you choose to strech yourself by starting your online business be aware that you’re not only starting a business, you’re making a decision to take full responsibility for your life and where it’s going.

You’ll have to decide what you actually enjoy doing, and then go and do it, in the face of the majority of your friends and family who will probably say ‘what the Hell does he/she think he’s playing at??’

Trust me – I turn up at family gatherings looking slightly dishevelled and hairy (just look at the picture on the right!) and listen to family members with ‘good jobs’ (‘for GOD’S SAKE Tony – you could have been an accountant by now!’) tell me where I’m going wrong.

Yeah well I’m the one who’ll be ‘working’ from a Villa on a Greek island for a month sometime this year.

…….and a wooden hut in a forest, a 28 foot sailboat, a gite in France and quite possibly, a pub.

And all because I chose to start an online business.

I chose to do things differently.

Personally I LOVE people who have never even heard of internet marketing, because they’re the people who keep the herd running in one direction.

And we know that the money, the freedom and the choices lie in the other direction.

If you’ve dragged yourself into work today, hating every second and glancing at your watch every five minutes then think on this….

Jump on board with us now – make the smallest of steps NOW while you feel motivated – sign up for The KickStart Course and we’ll guide you through how to set up an online business, or at least give some serious thought to the path you want your life to take.

If you read my blog regularly you’ll know I’m not in the habit of putting many sales links in.

But in this case and judging from the feedback we’ve received I think this is something that can make a difference to a lot of people.

I hope so anyway.

2 responses to “My first day back at work – what about yours?”