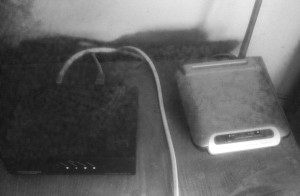 We run a few businesses from home.

But of course offline business need online presences so in reality there’s a lot of internet stuff going on in various different rooms at any one time of the day or night.

Which meant it was a major ball-ache when the internet went down.

It’s pretty reliable but it’s not 100% and it always seems to pack up when there’s something important to do, as I’m sure you’ve found.

So we got another internet service installed.

If there’s an issue with one provider we just switch wireless networks to the other until it’s sorted.

It’s a really simple solution but it’s made a huge difference.

Weird how hardly anyone does this though.

I mentioned it to friends and work colleagues and some of them said ‘Are you allowed to have more than one?’

And that’s where the problems lies.

Most of us can think outside the box to some extent

But most of us are also conditioned to seek permission by default.

If you find a solution to a problem that bottlenecks your business, sort out the solution and THEN ask permission 🙂

And if you work from home and use the internet get two lines installed. It’s life-changing stuff