How I’ve increased my income month by month, for the past four years! 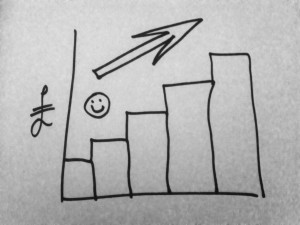 Just the past four years of course, because before then I hadn’t worked out this stupidly simple method of making sure my income increased week after week, month after month, and year after year.

While this works incredibly well for me I can’t guarantee it will work for you.

Basically this is simple human psychology.

The same sort of thing that existed in Athletics for decades.

Many said the four-minute mile just wasn’t possible for humans. It stood for, well bloody ages, until Roger Bannister broke it in 1954.

46 days later someone else broke it.

Because he had seen it was possible.

Rather than go out and run a mile I decided to adapt the theory to my business and began to record my daily sales totals.

The theory was that if I could ‘see’ what I was earning I could increase it.

Doing this daily is a bit pointless if you actually try to beat your daily totals (too hard – at least to start with)  but if you look at it monthly it gets a hell of a lot easier.

Do record your totals daily though.

The basic method is this:

Look at what your sales are monthly, and try to increase them by just 5% the following month.

It’s easier if you set yourself waypoints – I do this weekly – to see if you’re on track or not.

If you’re aiming for a goal it’s SO much easier than just wandering along ‘trying to make money’ each month.

The real secret of this is that you’ll probably find that although your ‘official’ target is to increase your income by 5% each month,

you’ll actually do significantly more than that.

You’ll mail out an extra promotion a month, for example.

Or maybe write a viral report or create a WSO.

Whatever you decide to do, you’ll almost certainly find that the extra effort you put in pays off each and every month.

If you see what’s possible you’re far more likely to improve on it.

When you just get started in IM earning $1,000 a month can seem like a dream. Get a year or two in, and if you don’t make $1,000 from a single promo you’re disappointed.

It’s all a matter of being able to see your targets so you can improve on them.

I track my sales daily, weekly and monthly. If I find my sales by the end of week 1 in the month are down on the previous month’s, I find myself making an extra effort to try to ‘beat’ last month’s figures.

This (daft really) little competitive game has increased my profit month in month out for over four years.

One response to “How I’ve increased my income month by month, for the past four years!”