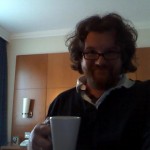 Very friendly people in this part of the world,  although with the Bristol accent they all sound like pirates to me.

The taxi driver from the airport told me about how he used to get half a dozen fares a day taking business people to and from meetings at some of the bank headquarters down here, but since the economic downturn he barely gets one a week.

Although when we’re in an industry where talking to people on the other side of the world is commonplace, be it by skype, email, webinar or podcast you have to wonder why they’re spending money flying people up and down the UK.  Maybe that’s why they’rel broke.

We’re pretty cutting edge compared to most offline businesses, but then we’ve known that for years.

And the other think I love about meetings like this is how they totally and utterly LEVEL people.

I flew down here in a (scarily) small plane and every single person except me was dressed in a business suit. Some of them – mostly male I’m ashamed to say – thought an awful lot of themselves judging by the way they spoke to the flight attendant.

But in the hotel there are people wearing jeans (me), suits, sandals, t-shirts and every other combination of clothes you can think of.

I’ll bet that some of the suits would wet themselves if they realised the little bloke from some small place in America or the woman with the dreadlocks from some little town in the UK pulled in over a million dollars last year.

I walked through the hotel to try to get my bearings earlier on and I’m pretty sure now that I can recognise an internet marketer at 100 paces.

They’re the ones who don’t make assumptions about sex, clothing, age or any sort of physical appearance, because ANYONE here can be an IM success story. They just casually check each other out, seeing if any faces look familiar.

I think it’s going to be a fun seminar!

6 responses to “At the seminar”