Hangover Cures And MUST HAVE Software!

This morning I had a hangover.

Friends stayed over last night and alcohol was consumed. Bit worse for wear this morning.

I was rattling about looking for a hangover cure when my wife said that a whisper was going around the village that the bilberry bushes on the moor had borne fruit. I know this sounds like a Thomas Hardy novel (but without the death, suicide or depression) but just bear with me for a bit – it’ll be worth it!

Bilberries are a local delicacy – a small round, blue-black berry that is made into ‘mucky mouth pie’, and ( I was told) has almost mystical hangover curing properties.

Ten minutes later this was me: 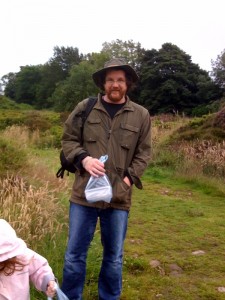 , along with spouse and kids…..

Feeling like death and wondering why I hadn’t chosen a bacon butty instead.

A couple of hours later and the wind and rain had blown away all traces of a hangover and I felt great!

And some kind of bilberry flan, tart, pie or whatever will be on the menu tonight.

Word had certainly got out though, and while we didn’t quite come to blows with any of the other bilberry pickers, I certainly used my newly bloodshot eyes,  once or twice, to warn people to stay away from ‘my patch’.

When I got back home and checked my email I something that I’m pretty sure will be of interest to many of you. It certainly will to me!

I know many many marketers start emails with ‘a good friend of mine…..’ but in this case it’s true. I met up with some mates in the business yesterday and sat down with this particular buddy while we had some lunch and a pint and discussed a bit of business.

The man in question is John Sikora, and if you’re a guru you’ll definitely know who he is, because he’s the man behind one of the most avidly-viewed sites in Internet Marketing, GuruDaq.

John is on first name terms with more gurus than a Vegas seminar, and he’s a seriously clever bloke too.  I’ve known him for several years and he’s helped me out with his technical knowledge on dozens of occasions. He’s the real deal when it comes to being an expert.

He’s got some new software out – just released – and he’s agreed that I can tell you about it, and he’ll keep the price fixed while you get chance to give it the once over.

Basically it is going to save many, many marketers a lot of time and money that they incur when they get HACKED. Now I attend the business meeting John mentions in the page below, and I can tell you that 75% of the internet marketers in that room had, at some point, been HACKED.

John’s created some truly excellent software that installs easily and sends you an email the very SECOND it detects that a file or folder in your hosting account has been added, deleted or changed. It does all this without you having to lift a finger.

Basically it tells you if you’ve been hacked. Automatically. You can set it and forget it.

If you’re hacked, you’ll be able to sort it out within minutes. Unlike someone I know who had a bank phishing page installed on his server for weeks without knowing anything about it.

That sort of thing costs a lot of money to put right, not to mention lost business, lost files and downloads, and subscribers losing confidence in you.

If you have websites, grab yourself a copy of John’s software. No big fancy website here – just SOLID software that I reckon is going to be listed in the ‘internet marketer’s top 10’ of must-have software very soon.

Check it out if you have websites you care about. Don’t leave it too late.

15 responses to “Hangover Cures And MUST HAVE Software!”