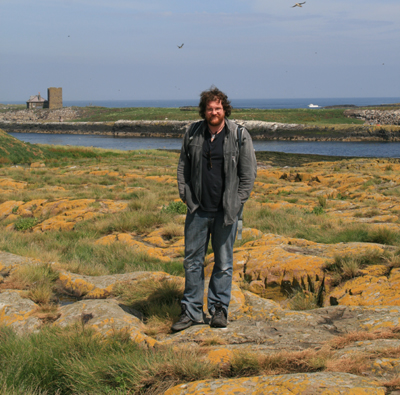 So this is me with my foot in a huge pile of Shag crap.

A Shag, as you probably know is a large seabird. It’s also Brit-slang for sexual intercourse.

‘Do you know the difference between a Shag and a Cormorant?’

‘In that case I’ll see you tonight’ he replied, laughing.

It’s an old joke but he was a crusty old sea dog and I found it funny anyhow.

He had a face like a leather handbag and hands like five pounds of sausages but he obviously loved his job.

Who wouldn’t? If I hadn’t already found my perfect job I’d be happy to potter around a sea port in England or France catching lobsters for dinner or doing the occasional fishing trip for rich tourists.

He certainly knew his way around the various channels and currents around the Islands though. I wouldn’t have dared take a boat anywhere near them.

Totally gorgeous part of the world too. Off the Northumbrian coast on the North East tip of England. Edinburgh’s just a bit futher up the road.

I’m writing this from a pub on the mainland overlooking the bay, with a great pint of Farne Island real ale in front of me by the way.

As usual we bring the office with us. This is by choice of course because the support staff easily run things while we’re away.

And as always a fat notebook and pen for me, because I don’t do idea generating on the computer – I always scribble by hand.

The other thing that has changed is the offline side of the business. We now divert our personal phone line and business phone line to the iphones.

So while I’m making sales in the usual way while I’m away, this time my wife took a big order while we were on inner Farne. The boat had left us, returning later that afternoon, so there was no way on or off the island, but we were still able to conduct business. How cool is that eh?

Technology is a blessing or a curse, depending on how you look at it I suppose, but the order we secured (to be honest the groundwork was done a month earlier) paid for the whole trip 5 times over.

We asked the confirmation to be emailed over, and the whole thing was done and dusted in less than 5 minutes, including checking the order and providing details of how they could pay.

All done from an uninhabited island using an iphone. Bloody marvellous. Although I admit to realising as soon as it happened that it would make a fabulous blog post too.

I’m not really into birdwatching but it was incredible to see Puffins, Terns, Gannets, and another dozen species I couldn’t identify nesting literally feet away from where we were standing. The kids were blown away by the whole experience. 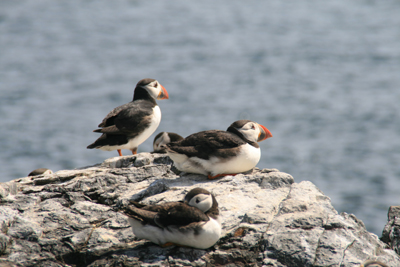 (But Gawd, when you’re getting close to the islands and the winds blows off them, the stench of bird shite brings tears to your eyes.)

I was more interested to chat to some of the people we met on the island and en route though. One good photograph of a seabird, can make a lot of money if the photographer licenses it cleverly I was told.

And among the hardcore birdwatchers there were professional artists and photographers who sat on the moonlike rocks for hours preparing products that would generate a lot of money for them. I liked this – I’m really interested in how other people make their living.

I’m always amazed at how some people adapt their lives so they can be in a situation they want to be in. I’ve mentioned before about meeting successful business people who have sold up and opened little coffee bars in places they’ve visited and just wanted to stay. In our village we have an American who fell in love with the Yorkshire countryside (and then a local shopkeeper) and simpy found a way to stay. They now run a successful business.

The formula is the same for anyone who wants to change their life.

Stop walking with the herd, start looking around you and start thinking for yourself.

Having time to ‘stand and stare’ is not only a major part of life, it’s absolutely essential if you want to change your situation for the better.

You NEED to stand and stare for a while to see the opportunities that are in front of ALL our noses.

Like taking a boat across the sea to a rugged, beautiful island, spending all day photographing the most amazing wild birds. Doing this maybe three times a year and earning your full-time living from it. 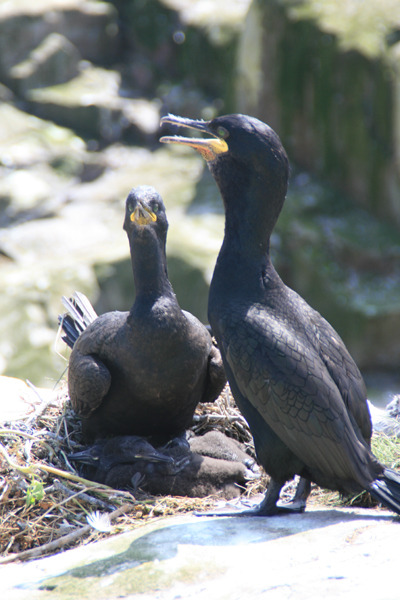 Or the skipper who took us across. Decides he loves being out on the ocean so buys a retired fishing vessel with a partner, fits her out for passengers and spends the summer ferrying bird enthusiasts, artists, photographers and wandering internet marketers safely through hidden rocks and rip tides to the islands, past Atlantic seals, dolphins and Arctic Terns.

How do I find all this out?

Easy. I’m naturally a nosey bugger so I simply ask. Start chatting away to them. Their passion does the rest. They’ll tell you about the funny things that have happened, the close calls, the wildlife and the long winters when they can’t get out onto the water. They’ll tell you about the photograph they took that featured on the cover of National Geographic, or the time they waited 11 hours to photograph the season’s first Puffin chicks.

So I said to my missus – ‘quick take a pic of me for my blog’ and she commented that every picture she takes shows me in walking boots, a rucksack on my back, going ‘somewhere’.

Well that’s what we do, that’s why.

I figure I can sit round a pool on a cruise ship when my legs are too knackered to take me anywhere any more. Luckily my family are even more adamant about this than I am.

Of course we do relax too when we take a break. A fair amount of wine and good grub is consumed, but sometimes you have to accept that we’ve only got the one life (Buddhists excluded) so we should do interesting stuff with it.

We take quite a few breaks and I forget to blog about most of them – too busy doing stuff – but I’d like to leave you with this thought.

Internet Marketing is a means to an end. That doesn’t mean I don’t love doing it of course, but it’s easy to see it as ‘what I do’

In reality it isn’t. What I do is LIVE. What Internet Marketing allows me to do is to run my business from anywhere, spend time with my family and to be totally FREE of any kind of boss or job restrictions.

I KNOW you’ve heard this from me and other marketers before but Internet Marketing is YOUR way to do this.

And IM is also the easiest way to do this that I know. But you have to know what you want first. The skipper and the photographer – they simply KNEW that they wanted to do that stuff and found a way to make it happen.

If you know what you want to do it gets easier. Having lots of money isn’t a goal. It’s not – honestly.

Having enough money to travel the world, or set up a charitable foundation or just to be able to spend your days learning to paint….well that IS a goal.

Hippy Marketing is about just one thing: using your online business to free you up, so you can enjoy life.

You’re in an enviable position guys – most people on the planet have never even heard of Internet Marketing. You’re already doing it.