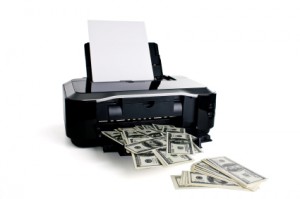 I’ve touched on this before but I reckon that you have to be around internet marketing fro a while before you actually REALISE the truth of it.

It’s also the reason why many newcomers never EVER make decent money online.

I’ll give you an example.

If all I do in a certain day is send a promo out to my list – just a single promotion for another marketer’s product with my affiliate link in it – I might earn between two hundred to two thousand dollars from it. Perhaps a little more if it’s a total killer.

I’m not complaining of course, but it’s important to understand that it’s the MAXIMUM reward I can earn from that amount of effort.

If all I do is that one mailing, that’s ALL I will earn.

You only earn what you allow people to pay you.

So if I want to add another $100,000 to my bottom line I might spend some time creating a new continuity program.

If I want to add a million dollars to my bottom line I might build up a new stand alone business for a year or so then sell it.

So my point is that the money you make is CAPPED – it’s limited – by the things you do.

If you have a $17 product and you get a mailing out to 1000 people you might make in the region of $2,000 based on a decent conversion rate.

But no more than that.

To earn more than that you either have to keep promoting it – maybe by buying solo ads, doing adswaps or getting jv partners or affiliates….

….OR you have to so something else that brings in money.

Not that hard to do if you have skills to sell, BUT you have to put the work in because that 10k isn’t going to drop out of the sky OR by putting a link to a $7 ebook on your blog.

Putting that $7 link on your blog AIN’T worth ten grand a month, yet some people expect it to

You have to do the RIGHT things to make the sort of money you require.

So start from the money?

You could do the mentoring thing as I mentioned above.

Or you could start a conintuity program for $17 and get 600 members.

Again (surprisingly) not that hard if you keep promoting it.

You’d only need 185 members paying $27 to join your PLR club or your group coaching.

You’re following this by now right?

SO many people just don’t get this.

So look at your setup

Look at what you’re offering.

If you’ve created your first product and it sells for $9 and your target income is $3,000 a month then you need to sell 334 of them every single month to hit your 3k target.

That’s no easy task, even though it sounds like it is.

You could make it easier for yourself by offering a $17 continuity as the upsell – an extension of the information in the ebook.

Or a ‘done for you’ service could work too.

It might involves outsourcing but get your figures right and you could have a hefty profit after paying your workers.

So here’s what I’m saying.

If you find yourself saying ‘I’m not making any sodding money!!’

Then look at what you’re selling.

If you’re putting half-hearted afiliate links to other people’s products on a blog that gets visited by 47 people a month then that’s WHY you’re not making any money.

Donald Trump would have trouble making money under those circumstances.

You need to have a viable system to support the income you want.

Selling $7 ebooks alone will NOT bring you $10k a month. Not unless you’re VERY VERY lucky.

But adding some continuity, a bit of mentoring and an offline ‘arm’ to your business might…and probably WILL.

There’s a very REAL relationship between what you’re offering for sale and how much money you make. Money, even in internet marketing does NOT leap up and say hello.

And surprisigly not a lot of people understand that. Esecpially when they get started in internet marketing with all it’s dingly dangly riches and sexy promises.

I didn’t understand it myself when I just started out.

It was probably only when I first dabbled in continuity I thought ‘bugger me my bank balance has shot up a bit there’ that it started to really dawn on me.

Have a think about it….