Found a ferret in the garden 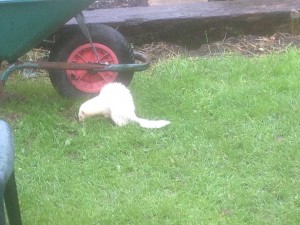 We’d just collected the kids from school when we found this little chap in the garden.

Obviously a domesticated ferret because when I went out to say hello he was very tame and even tried to get into the house which wouldn’t have been a good idea.

Quite a few people in the village still use ferrets for hunting rabbits so he’d probably not wandered too far, and in some circles a good rabbiter is worth it’s weight in gold.

I went to fetch some heavy gloves so I could grab him and keep him safe while I found out who he belonged to but when I got back he’d gone .

He’d been spotted by others apart from us though because for the next two days people around the village could be heard asking each other ‘You’ve not lost a ferret have you?’

I’d not seen once around since last year when I lost the best part of £30 funding my kids’ gambling habit at the village hall ferret races.