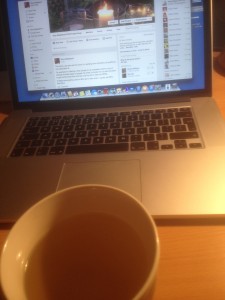 I start my day with a cup of green tea, except when we’re travelling (then it’s coffee)

Because there’s no sugar or milk in my tea it takes an age to cool down enough to drink.

Just enough  time actually to go through my emails and prioritize them for the day.

I used to know of a piano player who would make himself a scalding cup of hot chocolate to force himself to practise his piano.

It was far too hot to drink and he really wasn’t going to put it down on the rich, shiny wood of his piano while he practised.

So instead he held the cup in his right hand while he practised his scales with his weaker, left hand.

It made him practise for at least ten minutes while his choc became cool enough to drink.

I’d say a negative ritual was a rut…