The character of successful people 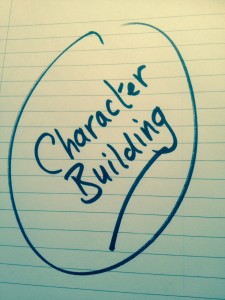 I see the same thing with the successful clients I’ve coached.

It’s tricky to define character but for me it shows up as self-reliance, ability to take responsibility, not blaming other people for their situation (biggie that one) and having confidence in your own belief.

And that’s usually the definition of character in films and books too.

The upstanding, confident, moral and self-reliant hero saves the day.

But they’re missing something…

As well as all the above traits, the successful people that I know personally and that I’ve worked with all have two other characteristics that I would say are vital to their success:

Humour and a slightly maverick spirit.

They often see the funny side of things going wrong.

They also have the ability to give you a cheeky sideways grin and say ‘Oh bugger it – let’s try it and see what happens :)’

…and it’s often exactly the opposite to what most people would think.

Possibly the most interesting thing about success traits is that they don’t always seem to come as a package when you’re born.

I’ve seen people work to actively build the one or two traits that were missing to make the whole ‘success’ package and go on to be really successful in their niche.

Weirdly though it’s usually something that they work out for themselves.

If there’s a bit of the puzzle missing they often develop it – almost by saying ‘what attribute would make this situation work?’

If humour would get them past a certain hurdle then they’ll add that to their arsenal – if confidence would, then they’ll work to develop that.

…and even more fascinating to try to put it into action for yourself.