Abandoned in a blizzard (sort of) 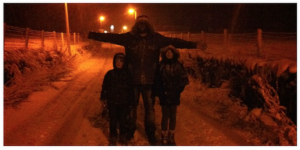 So we were driving home from a family get-together last night when the snow hit out of nowhere.

We’d driven over in our big, comfy seven seater which (we now know) is about as much use as a one legged man in an arse kicking contest in even a few inches of snow

Leaving that the car that WOULD have been better on the snow at home…doh!

(The pic is us on the trek home before rescue)

Total strangers that lifted my faith in humanity.