Why are some people SO angry all the time? 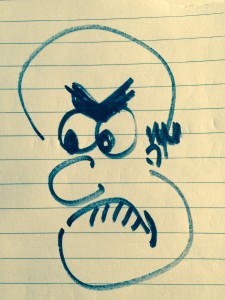 The other day we ended up at Knowsley Safari Park with the kids.

It was the school half-term break so the queue to get in the place was half a mile long, edging forward a few feet at a time.

There were two lanes of cars – the queue in the left land and the right lane that continued on to a nearby town.

Some drivers drove up the right lane then tried to push into the queue to cut out their waiting time. Some did this on purpose and some didn’t have a choice because of the direction they’d come from.

Anyway as we waited (took about 30 minutes) to get to the Park, we chatted, laughed, ate samosas and basically made the most of the time.

Sometimes a car would come up on our right side and I’d usually let them in the queue in front of us, especially if they had young kids with them.

I maybe did this two or three times at most.

And every time I did this the bloke behind me went totally ballistic – waving his hands, shouting obscenities and holding his horn down for long periods.

Obviously he was bugged at me letting people into the queue.

Truth told though it made sod all difference to the amount of time we were queuing and his reaction was quite funny so I did it a few extra times to see if his head would physically explode.

As we got actually into the park and heading towards the toll booths to pay (still in car) I noticed that tempers were seriously frayed all over the place and we saw car lunging at each other, windows rolled down and people swearing at each other and even one altercation where a bloke got out and was banging on the window of another man’s car.

The animals were very gentle and dignified in comparison.

1. If we ever hit a crisis where people have to help each other and work together we’re all totally fucked – life really does seem to be every man for himself

2. People seem so bloody ANGRY. At nothing in particular, at any situation that doesn’t 100% satisfy their needs and just generally at life, and I think that’s really sad.

I saw the man who was in the car behind us as we wandered towards the car at the end of the day. He was yelling at a woman who had refused him and his family entry to a sealion show because they’d arrived ten minutes late and it was full.

I wondered about his life, and what was making him so angry at everything, and thought maybe he was going through things I knew nothing about and that’s why he was taking it out on other people

Then I thought ‘what a dick’ and we went home after a great day.

3 responses to “Why are some people SO angry all the time?”