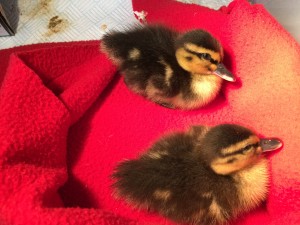 So now we have two wild Mallard ducklings

They’re possibly the cutest things I’ve ever seen and my wife and chidren are smitten, yet we have a strong sense of realism about having them (temporarily) living with us

I won’t go into too much detail about how they came to be here except that I wasn’t entirely happy about it (people thinking they’re doing the right thing often get it badly wrong) but they are now definitely orphaned and have nowhere else to go.

They were cold, bedreggled things when they arrived but now they’re putting on weight nicely, are swimming and seem to be happy and in perfect health. They haven’t got their own waterproofing just yet but a fluffly towel and a good heat source means they can practise in the water and keep warm immediately after.

They need to reach certain stages when we can remove their heat lamp (we’re already slowly doing this), let them live outside for longer and longer periods…right up to the point where they’ll fly away to do their own thing.

We have a tiny pond but it’s not really suitable for fully grown ducks but it just might suffice until they feel it’s time to go.

They’ve probably already imprinted on their mother (they were only a day old or so when they came to us) and they’re being treated very much like the wild birds they are although they do seem to like a snuggle once in a while. We’ve got the right food for them and as good an environment as possible excepting of course being in the wild with their mum.

They get loads of care from the minute my daughter and I get up to let the chickens out in the morning,  right through until we go to bed so we’re keeping an eye on them most of the time. 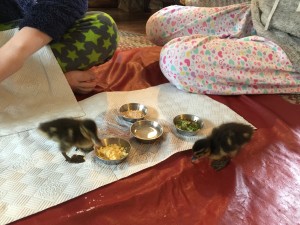 It’s an amazing experience for our children and I’ve no doubt there will be tears when they leave, but all in all it’s a far more valuable educational experience than the sodding SATS tests the government are forcing on kids under 12 in the UK at the moment (kudos and support to all the parents who decided to keep their children off school today in a protest about how much stress the government is putting our children under)

We are playing hotel to two Mallard ducklings.