It’s time to throw a few emails on the scheduler, decorate the blog with a new banner or two and settle down to enjoy Christmas.

Here’s a pic I took this morning with my iphone after yelling at the kids to get out of the way and wondering why the bloody telly was switched on at five to eight. 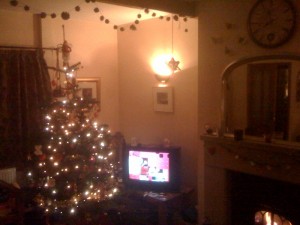 I wanted to show you what Christmas looks like in it’s natural state in our house at the moment.

We let the kids put up most of the decorations or at least suggest where they should go. They love it.

There’s a touch of the pagan too with pine cones hanging from the beams, a Green Man icon on the wall outside and a Richard Dawkins book under the tree.

Speaking of ‘the dark side’ I got an really genuinely pissed-off sounding email from a subscriber last week, and it’s what I wanted to blog about. Christmas was just a nice introduction.

The email basically asked if it was still worth trying to get into Internet Marketing because from what he could see, each year is just throwing up more crap, more hyped up launches and more ruthless IMers who’ll try pretty much anything to get money from you.

Well yes it IS getting worse from that point of view.

Some marketers are definitely getting more desperate.

It must be a right pain trying to fund a big house, flashy car and jetset lifestyle when the ‘punters’ just won’t put their hands in their pockets any more.

My heart bleeds for them.

I’ve seen at least three high profile launches flop this year. The product owners must have lost tens of thousands of dollars.

They give away prizes, cash and other incentives. They pay for sales letters to be written,  extremely fancy sales pages to be built not to mention products to be created and back end systems put into place.

Then they launch and it flops. Well good – it looks to me like ‘the punters’ have spoken.

There’s a real mentality among some marketers that their lists are thick. Stupid.

And yes. some of them are, just like some marketers, some butchers, some vicars and some teachers are thick.

But some of the promises that went up on sales pages last year were in the realm of fantasy. Total bloody lies if we’re being honest. And that’s without getting into the ‘only 300 copies left’ crap.

The really insulting part (and remember I’m a customer too) is that they think I’m more likely to buy when they tell me what the product is NOT rather than what the damn thing does.

Now I know that blind sales pages work, but they result in refund rates you wouldn’t believe. I know one launch that topped 50% refund rate earlier this year. That’s crazy.

Which is what my REAL problem is with some of these marketers – they’ve lost sight of the art of selling!

It become a numbers game – get loads in through a blind sales page and hope that less people refund than buy.

I miss the well crafted sales letter, the various tips (yes even tricks) and techniques used to persuade someone to buy your product.

These launches just seem a bit……’in yer face’ for me.

That said I’m not stupid. I get to see the inside of most of these launches to watch what happens (or I did until I wrote this post lol)

I study the sale pages, the emails, the upsells, the videos, the pricepoints and obviously the results,  to see what works and what doesn’t.

And I’ve come to a couple of conclusions

1. Only about 50% of the wannabe ‘inner circle” make any decent money from their launches after paying for sales pages, affiliate fees, web site creation and the rest. The others either just about break even or lose money. The very top guys lose too, just nowhere near as much.

Of course that also means that over 50% are making quite a killing, which is why these kinds of product launches keep going.

There’s a launch coming up next year that is DOOMED to failure. The marketer is already at least $20,000 in the hole with his prizes and site prep. I hope it succeeds (if the product is good – not seen it yet) but I’d bet a grand here and now he’ll end up in the red.

2. It’s bloody hard work. Seriously – you’ve got to admire the time and effort these guys put into their launches. It must take months to put them together. Shame the smallest amount of effort goes into creating the actual product in a lot of cases.

3. It’s not all bad. I have promoted a couple of these ‘hyped up’ launches because I’ve seen the product and it’s great. I’ve taken some flak for doing so but in the end the product has been a good one so I’m happy with that, and more importantly so are most of my readers who bought. I try to only recommend products that I know will help you.

So what’s the answer?

IS it worth getting into IM when there’s do doubt that hypey launches are getting worse?

DEFINITELY – because I don’t think marketing IS getting worse – I think it’s just changing.

Here’s what I think is happening. I think that there will always be people who want to make fast easy money.

I’m one 🙂 I just have enough experience to know it doesn’t quite work that way. Not quite.

And these sort of customers will continue to buy into hyped up launches. After a while they’ll either go broke or become disillusioned with the hype and go do something else instead.

But they’ll be replaced by new fast-cash seekers. And the circle will go round again.

Listen carefully chaps – the hyped up launches are here to stay.

They really made their mark in 2010 and they are NOT going away. Not ever (or at least until some censorship mad bureaucrat decides to legislate against freedom on the internet)

So let’s not cry about it.

Let’s learn from it.

Let’s incorporate SOME of the techniques that the hype merchants use into our own marketing.

I’ve done some small tests and a video and a small payment button above the fold works.

…and have you seen that technique where they show you a graphic that says ‘SORRY! SOLD OUT!’, and the text above it say ‘don’t come back too late and find THIS’

Great technique. I LOVE it. I’m having that one!

Let’s get over this ‘us and them’ mentality that some ‘ethical’ marketers are pushing and just see hyped up launches as another part of IM – one you may or may not want to get involved with. Ethical marketers are marketing too, just in a different way.

I’m an ethical marketer! I’m just also capable of realising when someone’s trying to push me into making a choice about which ‘camp’ I’m in. Do I choose team ‘A’ the ethical marketers? Or team ‘B’ – the hype marketers?

Actually I choose team ‘F’, in which I tell you what to do with your ‘choices’

There’s no need to get angry, defensive or whimper about what other people do . Let’s face it, having a major rant about hyped up launches and prancing like an extra from Mama Mia is great fun, but it doesn’t increase your bank balance a jot.

Accept that change is part of life and then decide on a personal level if you want to get involved with high-hype marketing or you don’t.

Personally I’m on the shelf. Yes you heard me correctly. I’m NEVER going to get involved with the shady crappy promises that some of these marketers use, but some of the real (and very clever) techniques they use – watch out for them on my sites.

They’ll be marketing techniques though NOT lies or scams.

And have you noticed the number of marketers who are using the ‘I’m sick of it all’ angle to promote their own products?

Wooo that’s a good selling technique don’t you think?  ‘I’m not a hype merchant so BUY MY STUFF!’ At least the hypsters are what they are.

The ones you believe are just better at it that’s all. That makes you think eh?

But I’m always happy to see that the marketers I personally like, read and follow are around for yet another Christmas.

And my Christmas motto is the same as usual – It’s not good to take anything in life too seriously, let alone internet sodding marketing 🙂

Except Christmas of course. And that should be SERIOUSLY enjoyed 🙂

A very Happy Christmas and New Year To You And Your Family,

And a heartfelt thanks for continuing to read my witterings.