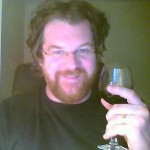 One of the first information publishing ventures I ever did was a course that we sold through newspaper classified ads. It was called The Bargain Hunter’s Course and it was about buying and selling on Ebay. We’d already had some Ebay success so we wrote it up and made it into an info product.

We bought a comb-binding machine and laser printer (not too cheap back in the day)and we ran a sort of print on demand service where we’d print off each course as an order came in.

The we decided to place a small classified ad in a UK national newspaper. They all seemed to have ‘biz opp’ sections back then.

We booked an ad that ran for two consecutive days. It was basically designed to get people to our laughingly ugly website. I’m talking yellow background, full page width, dark blue text and animated gifs.

We had two forms of payment option on the website. People could use Paypal to pay for the course, which was then shipped within 10 days, or send a cheque through the post, the course to be sent when the cheque had cleared.

Well the ad went live and the payments via Paypal took us by storm. I can’t remember exactly how much the course sold for but think it was around $167

Within an hour of the British public reading the paper over their tea and crumpets we’d paid for the ad three times over. By mid-morning we’d hit the $10k mark and over the next day, when the second ad ran we’d hit almost $19,000.

The ad ran on the Sunday and Monday editions, but it wasn’t until Wednesday Thursday and Friday the same week that we saw the real power of information marketing.

Because that’s when the cheques started to arrive.

Some bounced of course and there were refunds to contend with but we pretty much doubled our profit.

It was the most money I’d ever made from a venture.

We worked solidly for 48 hours, printing. comb-binding, compiling and posting course after bloody course. It was wonderful!

I can’t remember if we needed to change two printer drums or buy two more actual printers, but it was well worth it either way.

Strangely enough though, a little while afterwards we tried to replicate it with the same ad, but we barely made enough to cover the ad costs. We took that as an men and it was along time before I tried newspaper ads again.

We’d never even considered making the course into a downloadable format initially although we did later on.

What I do remember from that period was a sense of total CLARITY.

I could formulate a product and marketing plan in my mind in 5 minutes and the vast majority of them made a very good profit.

I put that down to only having the minimum amount of knowledge anout information marketing.

When I went fully online at first it was the same. Stupidly SIMPLE plans that just worked because there wasn’t enough involved to go badly wrong!

These days while I still have no shortage of ideas, it’s much less clear.

When I come up with a plan I also come up with half a dozen reasons why it won’t work, or how it could be done better, or how someone else already tried the same thing.

And I have to beat down these negative thoughts with a mental stick.

It’s because I know too much about internet marketing these days.

Sometimes I honestly wish I could forget the intricate and fine detail of IM – the higher level strategies – and just have the basics in my head.

Because the basics principles are usually what I use anyway (because they work) and the ‘fancy, twiddly bits’ that everyone seems to call ‘advanced strategies’ are just white noise that hinder, delay and sometimes even STOP me putting my plans into action.

If your ideas are sound, then the basics will push them to success. I honestly believe that.

Likewise if your idea is a duffer or based around some fancy ‘tactic’ rather than the basics of simply selling stuff that people want to buy, then you’ll most likely fail.

So I’m sitting here typing this wearing a tinfoil hat, to see if I can tune OUT some of the clutter that interferes with me putting a plan into action.

I’ve already started with a rough set of rules for myself.

‘If it’s something clever or pretty that doesn’t’ affect the main idea fundamentally, just makes it prettier, more ‘current’ or faddy then dump it!’.

I’m actively going old school these days. Doesn’t mean I’m behind the times – I just bought some extremely cool software the other day to build a new ‘service’ site in one of my niches. I’ll tell you about that when it’s done.

But when it comes to marketing, selling, product creation and business development, I’m very much going back to basics.

And in this recession that’s hitting some marketers like a ton of wet cement, my biz is doing better than it has been for ages.

So if you’ve not been around in IM for too long maybe you’re in a better position than some gurus who are using methods that made them money last year….

The question is how long will they take to realise it’s snuffed it?

I don’t think you need me to write a post about the current state of the industry. You just need to look around. See the huge wave of new marketers coming through making a lot of money putting their own individual stamp on tried and trusted methods like backlinking, flipping, SEO, product creation and blogging.

I don’t even open the emails I get from marketers asking me to promote the usual big Clickbank product launches anymore, because they’re not only shite, they’re BORING, which is much worse.

I said at the start of the year I was going back to basics – trying to actively UNLEARN some of the stuff that’s cluttered up my thought processes for a while.

Let me tell you guys it WORKS.

The current enviromnent is better than it’s ever been for newcomers, because gurus don’t own the industry any more. A quiet revolution is going on.

New marketers are coming through, using and selling honest and effective methods, which many established gurus are still sending out the same old (and now very embarrasing) hyped up ‘buy me, buy me’ emails.

Sure you might only think you know the basics, but that’s a powerful position to be in.

Why’d you think I’m putting so much effort into thinking like a ‘newbie’ again?