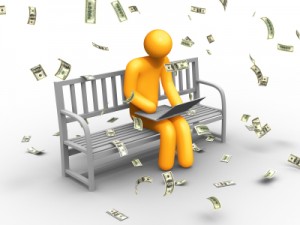 When I lost my virginity – my promo virginity I should say…

It was one wet and rainy Saturday afternoon, about 4pm.

We had just launched our first totally online ebook and to be honest with you I can’t even remember what it was called.

It was the first EVER promo we sent and we sent it via an AOL personal account. Didn’t even know what an autoresponder service was at that time. We had simply been adding email addresses to the AOL account. There were no permissions asked, no unsubscribe links. It was all very amateur and dodgy.

We had 4,000 people on the list. Or crammed into the address book of the AOL account is probably a better description.

We sent out details of the new ebook, giving the URL to the salespage.

After 500 had gone out AOL limited the account because they thought we were sending spam.

We got round this by sending 100 emails at a time. It took quite a while.

Once the last batch was sent we went back into the inbox to look for Paypal notifications to see if anyone had bought the ebook.

I’l never forget the feeling as I saw ‘Notification of Payment’ emails FILLING UP the entire screen of my inbox. The inbox screen displayed just 20 emails at a time but it still impressed me.

As I refreshed the screen I could see NEW SALES dropping in every few minutes.

I couldn’t quite pinpoint the emotions I was feeling.

Obviously ‘Bloody Hell!’ and ‘Oh My God’ came into it…

But mainly I knew I had opened a door I could never, ever close.

I knew there was no going back to any other way of making a living. I forgot the work I’d put into writing the book, creating the salespage, making a (seriously crap) website to show it all off…

…and just concentrated on the warm fuzzy feeling of watching money drop into my Paypal account from nowhere.

Fast forward to this week.

I saw a product I really liked and was pretty sure it would help my subscribers. I signed up as an affiliate, wrote a brief email designed to grab interest and get the reader to the salepage for more details.

Now do the sums for that.

If a marketer getting an average result like that sends two promos a week (that’s 8 a month) for a whole year he’ll make $57,600 a year JUST from sending promo emails to a list.

Over the years I’ve built lists of over a million people. Now hang on that’s nowhere NEAR my list size now because most unsubscribe after a certain time. That’s the nature of IM

My list is less than 40,000 people now because I regularly ‘prune’ the dead wood from it (people who haven’t bought for a certain amount of time etc)

How I do things isn’t to everyone’s taste either. I’m not a ‘vanilla’ marketer that everyone thinks is ‘OK’

Rather I’m a liquorice and blackberry flavour that you either love or hate.

But you can see that my list isn’t huge. It’s responsive but not huge. Most of my IM mates have lists WAYYYY bigger than this. Maybe not as responsive tho.

Speaking from experience, if you build a list of 10,000 people – which if you work at it can take just a couple of months, you can generate an income of $40,000 a year if you’re willing to mail three times a week. That’s from just blasting the buggers with promos.

We have a list (different business) where all we do is mail a list of about 5,000 people three times a week with related promos. That’s it. That brought in just under $20,000 last year. The work took about an hour a day, for just three days a week. Finding related promos, writing an email and sending it.

More if you’re willing to do blog posts and build a relationship with them.

I enjoy having a relationship with my list. This is why there’s great interaction on my blog posts and my ticket desk.

Some marketers think building a relationship is like trying to befriend your lobster just before you have him for supper.

And to be honest it’s EASIER not to build a relationship.

A mate of mine – an American marketer – is a GENIUS at this. I won’t name names but you’d know him. He constantly list builds and constantly mails it. That’s his business.

He loves it. I don’t know for sure what he earns but high six, low seven figures a year sounds right.

It WILL change your life.

Come a little closer to the screen and listen up:

“What the f*ck are you doing messing about with article marketing, or fannying about building a tropical fish Adsense site?”

You don’t need to create products, ‘establish a brand’ or anything like that. You may want to do that later with money in your pocket.

Many prospects actively DISLIKE it when you try to make friends with them. They simply want recommendations that they wouldn’t otherwise know about.

You want to make money in Internet Marketing?

HERE’S what you need to do to make money.

1. Build a list as big and as fast as you can in the IM niche. This will help with the ‘how’

2. Find products to recommend to it

Once you’re earning $4,000 a month from doing this, THEN you can start a blog about ‘Flower Pressing For Conspiracy Theorists’

Yesterday I recommended an easy to follow, very effective course that will show you how to build a list and become an email marketer.

Honestly guys, there IS a magic button out there where you just press a button and it pushes money into your account. It’s called email marketing.

15 responses to “List Building – how much can you REALLY earn?”