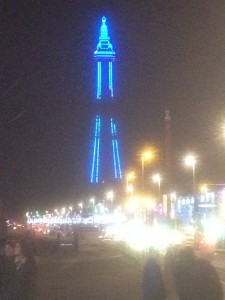 If you were born in the north of England into a working-class background as I was, and you have a children of a certain age, the chances are you’ll have been taken to ‘see Blackpool lights’ as a child.

One dark October or November night you’ll have been bundled into the car, possibly with warm blankets for when you fall asleep on the journey home and then driven to Blackpool to see the gaudiest, brightest display of bulb-work outside Bollywood.

The whole thing is very nostalgic for both my wife and I (she’s a northern girl too) and we’ve been taking our kids every year since they were old enough to walk. Actually since before they were able to walk, when we drove them through in the car or pushed them in the buggy.

It hasn’t changed much since I was there as a kid, except the street vendors are a little more pushy.

I got accosted by the same gypsy woman twice trying to sell me ‘lucky’ heather.

The second time was downright threatening as she warned me ‘not to cross a gypsy’ and seemed to basically curse me.

She told me she ‘was powerful and could influence events’

Not that bloody powerful or she’d be doing something warmer than trying to sell straggly bits of heather on a cold wet night I imagine.

Last time this happened to me years ago (a grumpy woman selling pegs I refused to buy called at my door) I cursed the gypsy back, including forking my fingers at her and spitting on the floor (actually I missed and spat on my own shirt but it added to the effect).

But going to see the lights is more than getting cursed, cold and buying all manner of crap – it’s like a pagan festival that marks the descent into winter. The kids are already saying that Halloween. bonfire night and Christmas are just around the corner.

We’re lighting a fire almost every night now and our food had turned from summery salads to more robust dishes – curries, casseroles and rich, wine-laden stews that are left to slowly cook all day and fill the house with aromas that make you want your dinner at 10am

I spoke to a vendor last night night – a local man who was selling battery-operated neon-looking swords, windmills, light-sabres and butterflies,

He says he can make enough money while the illuminations are on (29th August – 9th November this year) to last him for the rest of the year.

It’s mostly imported from China and he said the mark-up on each item (his profit) was something I wouldn’t believe.

He didn’t elaborate as to whether that was good or bad.

But obviously nostalgia sells. All these items were aimed at kids and bought by parents.

The most crowded stalls / stands seemed to be the people who weren’t pushy and simply displayed their wares.

The gypsy, the hawkers and the pushy sellers were given wide berth.

One response to “Blackpool Illuminations”