Why repairing your dishwasher is vital for your mental health 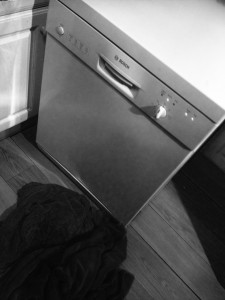 We have the bastard dishwasher from Hell…

That’s not how it was advertised in the shop obviously.

And it breaks down every few months.

It’s older than one of our children I think.

So common sense screams to me ‘Buy a bloody new one’ and to be fair sometimes my wife screams the same thing.

We can afford a new one obviously, and even where we live you can get one delivered and installed in around 48 hours for a small extra charge.

Well the problem is that when it first packed up it was less than two years old.

Out of warranty but annoying enough for me to be stubborn and refuse to buy a new one when it had broken down so quickly after purchase.

So I went online and to my lasting surprise I learend how to fix the bastard.

With this particular model there is a fault where the base fills with water, triggers a trip switch and needs manually draining before it will start working again.

And when I fixed it I felt like Tarzan.

So now when it buggers up and I can see that the problem is the same one, I fix it.

Takes a couple of hours but leaves me feeling the same way I feel when I chop wood, or fix the car or put shelves up.

In those hours I could create something online that would bring in much more money than fixing a fault costs.

More than enough to buy a new one and get some bloke to install it.

BUT THAT’S NOT THE POINT…

The point is that we all need to ‘do’ things now and again.

Real things that are a throwback to earlier times when things weren’t so disposable and people could craft things with their hands.

Yeah I know it’s romanticism and it’s easier to dump the old one and buy a new one.

But I think it’s a mistake, and not just from the ‘disposable society point of view that older people seem to rant on about in pubs.

I think creating things, art, manual labour, music, artisanship and repairing are vital for our spiritual and mental well-being.

There’s something that feels intrinsically wrong with disposal. If you’ve ever thrown away an old wobbly kitchen table or a wheelbarrow with a broken strut you’ll maybe know what I mean.

Throwing away something that someone created doesn’t feel quite right, even if it was created by a machine in a factory.

But some of you will know what I mean.

Even recycling doesn’t quite hit the spot because you don’t SEE for yourself what happens to the items you recycle.

So I spend quite a lot of my time away from the PC doing things like that – stacking logs, cutting wood, digging over the veggie bed, even changing the nosepads on my specs for some I bought on Amazon for £1 (I know), brewing my own beer (coming soon) and weird little bits of stuff that make me feel like a human being.

Dunno why it helps calm my soul, but it does 🙂

We’ve got four dining chairs that are on their last legs and won’t make it through Christmas so rather than taking them to the tip or freecycling them (they’re so wobbly it’s not fair to inflict them on someone else) I’m going to spend a few hours chopping them up to burn to keep us warm over winter.

(Yeah I know we could just switch on the central heating but let me have my romantic ideal eh?)

They’ve supported my fat arse for years and now they’ll keep me warm chopping them up AND when I burn them.