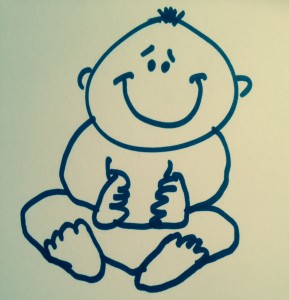 The major driving force for me quitting my 9-5 and going into full-time internet marketing, working from home…

…was the impending birth of my first child 🙂

Now THERE’S a deadline you can’t argue with eh?

There’s no asking for an extension or ‘an extra month because you’re not quite ready’ when it comes to babies.

So in order to be able to quit I knew I had to be earning at least the same amount as my current salary and I had around six months to get to that level.

We only found out my wife was pregnant when she was 8 weeks along, and then it took me even more time to realise that I wanted to be working from home when my daughter was born.

I had a simple strategy to replicate my salary from home.

Work my arse off.

I got up a couple of hours before work every morning and worked until after midnight every night.

My wife was (and still is) hugely supportive so that made things easier but I’ll admit I was knackered most of the time.

I just REALLY wanted it.

I didn’t just think ‘it would be nice’ to work from home.

I REALLY, passionately wanted to be able to be there while my kids were growing up.

I wanted it more than I wanted to say in bed when my alarm went off at 5am so I could work for two hours on my online business.

I wanted it more than anything else.

Now I’m not a willpower superhero.

I’m the laziest, most pleasure-seeking enjoyer of life that you could ever meet.

I enjoy comfort, having plenty of free time and don’t like hard work.

But in my daily life I have choices, and still do (as everyone does) and on quite a number of these decisions I still hear myself say ‘I want THAT enough to really work for it’

And I put everything else aside and go for it.

And I think that’s the difference between success and failure.

You either want it enough to get it or you don’t.

No moral judgement or right and wrong, no blame, no explanations…just a simple equation.