Not a traditional Christmas vegetable? Balls! 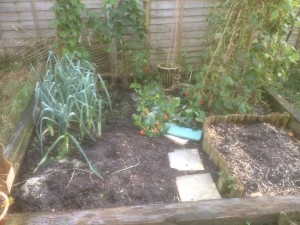 Well the least remaining veggies in the above patch is a small but lovely clump of leeks.

If you grow leeks you’ll know they’re around for ages because they take so bloody long to get to a decent size.

I’ve had my eye on these chappies for Christmas dinner since August.

Then some bright spark said to me:

Well apart from telling him to bugger off I also informed him that in England turkey isn’t a traditional Christmas food either – we imported the idea at the start of the century from our American cousins.

We used to eat mostly Goose.

Anyway, so our guests at Christmas will be offered home-grown leeks as part of their vegetable choice.

Bird wise we’re not sure yet, although I always thought it would be funny to offer Red Grouse, but by it’s other traditional name.

One response to “Not a traditional Christmas vegetable? Balls!”