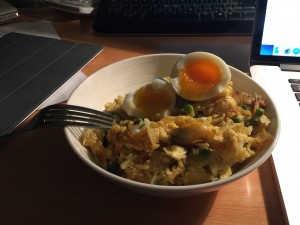 I rarely eat at my desk.

But when I really have to eat while I’m working my lovely missus usually makes me something I’m extremely partial to.

Home-made Kedgeree is one of those dishes.

If you’ve not had it before, it consists of cooked, flaked fish (traditionally smoked haddock), boiled rice, parsley, hard-boiled eggs, curry powder, butter or cream and occasionally sultanas. We put peas in it too.

Brought back from India by colonials in Victorian times when we Brits were relentlessly enslaving as much of the world as we could, it was traditionally served as a breakfast dish that would use up the leftovers from the previous night’s curry.

Ironic then that last time I had Kedgeree for breakfast  – this money-saving leftovers dish – for breakfast, it was in a £200 a night 16th Century hotel and the Kedgeree cost MORE than a night out at the pub!

But it’s a treat for me, and when you consider than in my opinion the other great import from Colonial India was Gin and Tonic, well I suppose the occasional night working at my desk isn’t too bad 🙂

2 responses to “Eating at my desk…not good…except for the grub :)”