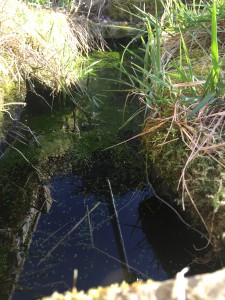 Because the frogs just ain’t getting jiggy.

For the first time EVER we don’t have frogspawn yet, and it’s overdue.

I know there are frogs in there because I’ve seen ’em but they don’t seem to fancy each other (maybe I should leave six cans of lager because that usually works for blokes on a night out) or they’re all the same sex.

…but none yet in our pond.

Some clever sod suggested that if I was so concerned I should get in there and have a go myself but so far that’s a last resort, as is ‘kidnapping’ frogspawn which, if not yet illegal probably soon will be under another Tory government.

…but I’m being entirely practical about this

The pond is next to our main veggie patch and frogs eat slugs.

If we can’t get the frogs in the mood, it probably means that at some point down the line the broad beans will get eaten by the slugs NOT me for my tea because there isn’t enough of a frog population to keep them down.

So I’m checking every morning like some freaky amphibian dad.

One response to “No frog Rumpy-Pumpy yet”